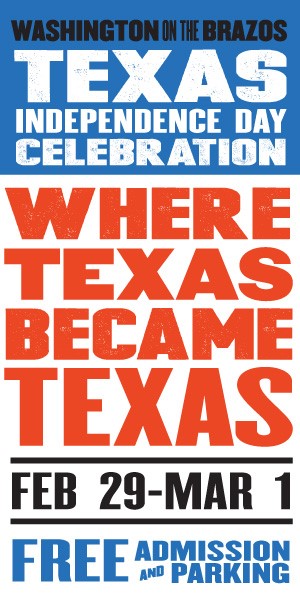 “Texas Independence Day Celebration” is an admission free annual two-day living history celebration from 10 a.m. to 6 p.m. on Saturday, February 29 and 10 a.m. to 3 p.m. Sunday, March 1 on the 300-acre Washington on the Brazos State Historic Site to commemorate when 59 delegates bravely met in 1836 to make a formal declaration of independence from Mexico and form a new nation.

A third tented stage will be at Barrington Plantation complete with performances commonly seen in the early 1800s with Dr. Balthasar Medicine Show, Professor Gerard the Texian Magician and a traditional Punch & Judy puppet show.

New this year at Independence Hall: Throughout both days of the event, living historians will present highlights of the Convention of 1836 including important debates, decisions and correspondence. Attendees will then have the opportunity to meet the “delegates” of the Convention and learn more about the signers of the Texas Declaration of Independence.

The Star of the Republic Museum, celebrating their 50th anniversary, will have demonstrators showcasing knitting, tatting, weaving, and quilting, along with the Star of Texas Dulcimers displaying their talent. The opening of the Museum’s new exhibit “Threads of History: Clothing in the Republic of Texas” will be on display. Using the Museum’s permanent collection, this exhibit offers an overview of clothing pieces typical of the 1830s and 1840s in Texas. Jack Edmondson will also be featured in the Star of the Republic Museum Theater telling Sam Houston stories.

Activities throughout the park include a Texian Village of arts and crafts, food trucks, a Kids History Zone. The Visitor Center will have Betsy Wagner, author of “Spirit of Gonzalez,”  autographing books on Saturday the 29th from 10 am to 4 pm and Sunday from 10 am to 2 pm.

Historical reenactors set up a bonafide 1836 Texas Army camp on the site grounds, where visitors can wander freely to learn how the soldiers and their families lived, and witness musket and cannon firings. The Texas Army is the official 1836 ceremonial and reenactment group for the State of Texas.

The weekend honors the actions on March 2, 1836, 59 delegates from all parts of the Texas settlement bravely met at Washington, Texas to make a formal declaration of independence from Mexico, proclaiming to the world that Texas was a sovereign nation. Revered as the place “Where Texas Became Texas,” the replica of Independence Hall on the Washington on the Brazos State Historic Site grounds marks the place where the Republic of Texas was created in 1836.

The Descendants of the Texas Declaration Signers will hold an open house during the event in the conference center with refreshments, music, live and silent auctions, medallions for sale and genealogists to help those interested in learning more about their ancestry.

Admission fees are waived for the site’s attractions (Independence Hall; Star of the Republic Museum and Barrington Plantation) for that weekend celebration. Admission to the grounds, on-site shuttles and parking are also free during TIDC.